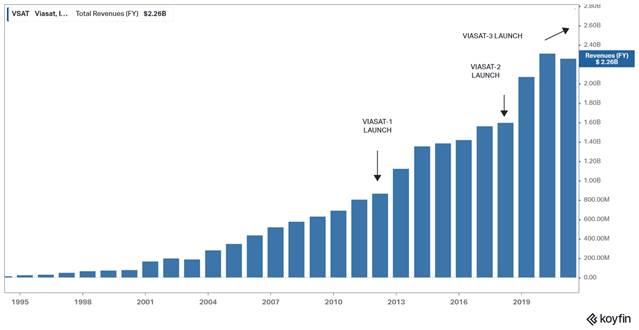 Viasat (VSAT) has been on my radar since 2008 when I was the Analyst for the James Irvine Foundation. We did due diligence on and invested in Baupost, founded by Seth Klarman, and it showed up in his list of current holdings. After doing some early due diligence the valuation seemed too rich to me and I did not invest. Twelve years later: the company quadrupled revenues while the stock price is only 52% higher. Further piquing my interest was that I now live 15 minutes from Viasat’s new headquarters in Carlsbad, California.

Baupost introduced me to a style of investment that proved very lucrative to the hedge fund industry and something that is widely available to the investing public as well: new communication companies with massive up front capital requirements that later gush cash flow. They can be a bit complex to understand leading to large discrepancies between price and value. Past examples include: Crown Castle (CCI), American Tower (AMT), and Equinix (EQIX). Viasat could be the next lucrative example for investors. 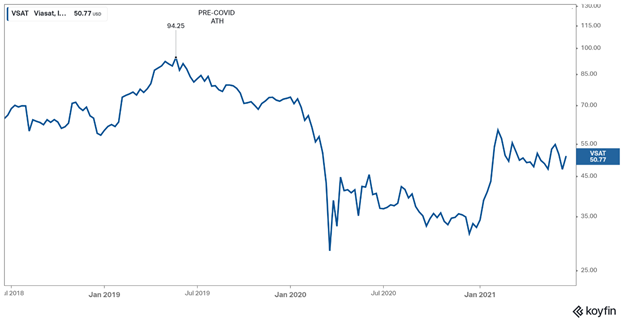 Pre-Covid, Viasat’s operating performance and stock price were on a roll. Considering that one of their fast-growing business lines was providing satellite-based internet on airplane flights, it is not surprising their stock took a big hit as Covid spread around the world and effectively halted global air travel. Further, Covid delayed the launch of Viasat-3. With supply chains backed up around the world and Viasat’s manufacturing facility in Arizona beset by Covid outbreaks, Viasat’s third and most promising satellite, remains firmly grounded. Thus, unusually, Viasat saw some revenue contraction and the stock market responded in kind.

Interestingly, most stocks hammered the hardest by Covid have quickly turned into recovery plays. Concert promoter Live Nation (LYV) already reached a new all time high. As did Disney (DIS), in spite of generating roughly half of their revenues from theme parks and movie theaters. Viasat did indeed have three quarters during covid of slight year-on-year revenue contraction, but their most recent quarter ended March 31, 2021 returned to growth, not just to the 2020 Covid quarter, but as compared to the same quarter in 2019. 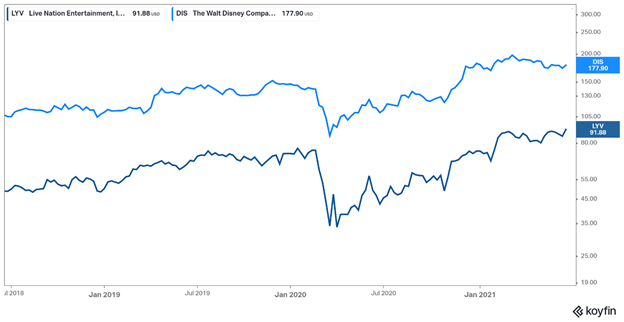 While Live Nation and Disney are heavily exposed to Covid, Viasat is much less so. In fact, their most important business line is providing satellite connectivity to the US military. However, Viasat does leverage their satellites to also provide in-flight internet service for American Airlines, Delta, etc. This business line was growing 25% pre Covid and effectively grounded to a halt.

Founder of Viasat Mark Dankberg made the comparison to Disney explicit in a recent Q&A session with a sell-side research analyst:

"One of the best companies in the world that is really suffering is Disney. And that’s because they have these theme parks that allow them to leverage the value of their other media and entertainment assets. Right now, those theme parks a huge drag because… people can’t go to them.

But I don’t think there’s another media company in the world that wouldn’t instantly take over all those theme parks if they could, right? If Disney said, “we don’t want them anymore,” I think that there’s huge demand for them. And that’s how we look at our airline business. Right now the airline business is very stressed and we have a bunch of our business tied up in that. But we think that business is coming back and we wouldn’t trade it for other businesses…

So that is impacting our business in the short-term. Remember, telecom is a high fixed cost / low variable cost business- so you know, a little bit under 10% hit to revenue is much more than that from a margins perspective. So we’re dealing with that. We’ve had to make some cost cuts in order to be able to preserve our cash flow, and that cash flow is funding our new assets.

The best internet is broadband run through copper cables controlled and offered by the cable companies: Comcast, Charter, Cox, etc. But, there are situations where cable internet is not available. The core demand for this internet outside of the purview of the major metros covered by the big cable internet providers comes from, in order of importance, from a business stand point: the military (cable internet is not widely available in Iraq and Afghanistan); domestic and international air travel; shipping; and rural residential areas. One of these core areas was negatively impacted by Covid. Which, led to Viasat having a few rare negative year on year revenue quarters. The market is currently providing an opportunity to the long-term, patient investor. Not only will this business come back. But, the also Covid-delayed launch of Viasat-3 will further open up Viasat’s opportunity set. Additionally, there is a plucky formerly California based tech entrepreneur determined to put satellite internet on the map. He has further been involved with securing ample federal subsidies to increase profitability and demand for a new class of satellite. 5G is around the corner. The demand for awesome internet everywhere and all the time is only set to increase.

Viasat offers the opportunity to invest in a business trading at a temporary discount due to a once a century event that was no fault of their own. Right before they complete their most transformative capital project to date. In future posts we’ll dive further into the business and valuation, but for now, we are compelled to buy a ticket pre-launch. 12 years later, we are investors in Viasat.