The most expensive growth stocks became to value was the late 1990’s dotcom bubble. Around the turn of the millennium the P/E ratio of value-to-growth stocks was 0.3. Once the bubble burst, growth was still priced higher than value, but in line with its historically average ratio of 0.7. At the conclusion of the financial crisis, for the only time in modern history, growth stocks were priced the same as value stocks. Investors favored safety and return of capital over growth and return on capital. 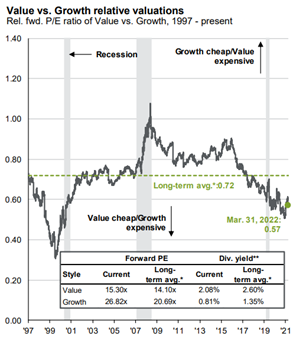 After underperforming value stocks by 14% year-to-date, how do relative valuations for growth and value compare today?

While neither cohort cheap is on its own, it does introduce a simple heuristic that may help investors in the process of stock selection. Consider that Apple is priced at 26 x forward earnings while Google 21. The former appears expensive to its growth cohort, while the latter is priced in line with the growth average. In the value cohort, a company like Cigna (CI) is priced at 11x earnings, well below what has historically been deemed reasonable for a value stock.